In Memory of Robert Morrison

The epitaph on Morrison’s grave reads:

SACRED
to
THE MEMORY
of
ROBERT MORRISON, DD
The first Protestant missionary to
CHINA
Where after a service of twenty-seven years
cheerfully spent in extending the kingdom of the blessed Redeemer
during which period he compiled and published
A DICTIONARY OF THE CHINESE LANGUAGE
founded the Anglo Chinese College at Malacca
and for several years laboured alone on a Chinese version of
THE HOLY SCRIPTURES
which he was spared to see complete and widely circulated
among those for whom it was destined
he sweetly slept in Jesus.
He was born at Morpeth in Northumberland
January 5th 1782
Was sent to China by the London Missionary Society in 1807
Was for twenty five years Chinese translator in the employ of
The East India Company
and died in Canton August 1st 1834

In 1934, on the 100th anniversary of Morrison’s death, the Chinese Christian Church of Guang-Dong erected this tablet next to Morrison’s grave. Below is an English translation of the tablet. 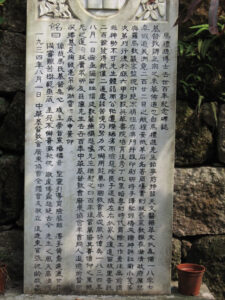 The story of a Christian Protestant who came to China to evangelize. Mr. Robert Morrison, in preparation for ministry, studied astronomy, medicine, and Chinese prior to his journey to China in 1807. Passing through the continent of America, a journey totaling 222 days, he arrived safely at Yang-Zhi. He stayed in a commercial market secretly doing Christian mission work. The situation was hostile: the Chinese Qing government made missionary activity illegal and they were under constant surveillance by the Roman Catholics. Nevertheless Dr. Morrison was not discouraged but established a printing press in Macau. He printed his hand-translated Bible, Prayers, Holy Hymns, and pamphlets.

Afterwards he moved to Malacca and established the Ying-Wa College to educate the next generation to face a dark and dictatorial age. Though his works were dangerous he went forward courageously. He certainly received the help of God since Mr. Morrison was physically weak and the working environment was poor and full of trials. Only his eldest was with him as the rest of his family stayed behind. He wrote over 200 plus communiqués home to notify that the environment was challenging but he was not giving up. Through his dedication his biggest achievement was to successfully establish a solid foundation for the Church in China.

On 1834, August 1st he passed away in sickness. Countless believers of all kinds cried in remembrance at the death bed of Mr. Morrison. He died in the hope that one hundred years later the Gospel he planted would grow ten-thousand fold, to places the eyes can see, to reach out to all the peoples.

We erect this stone on the one hundredth anniversary of the passing of Mr. Morrison. From all the members of the Chinese Christian Church of Guang-Dong Association, in remembrance of a past giant, to express our highest admiration and sincerest, humble sadness and to express our eternal gratitude.

The great Mr. Morrison had a Christ-centered heart. Through the will of God he spread the Gospel. By the guidance of the Holy Spirit he went through dangers to arrive at his destination. Through him came many blessings to the Chinese people like the rains are to the ground. In suffering and trails he remained firm. He never gave up and was always dedicated. Great is his humbleness beyond any past generations. The memory of him will last in eternity.

1934 August 1st Epitaph respectfully made by all the members of the Chinese Christian Church of Guang-Dong Association. Your humbleness Pastor Zhang Zhu-Ling wrote with respect.